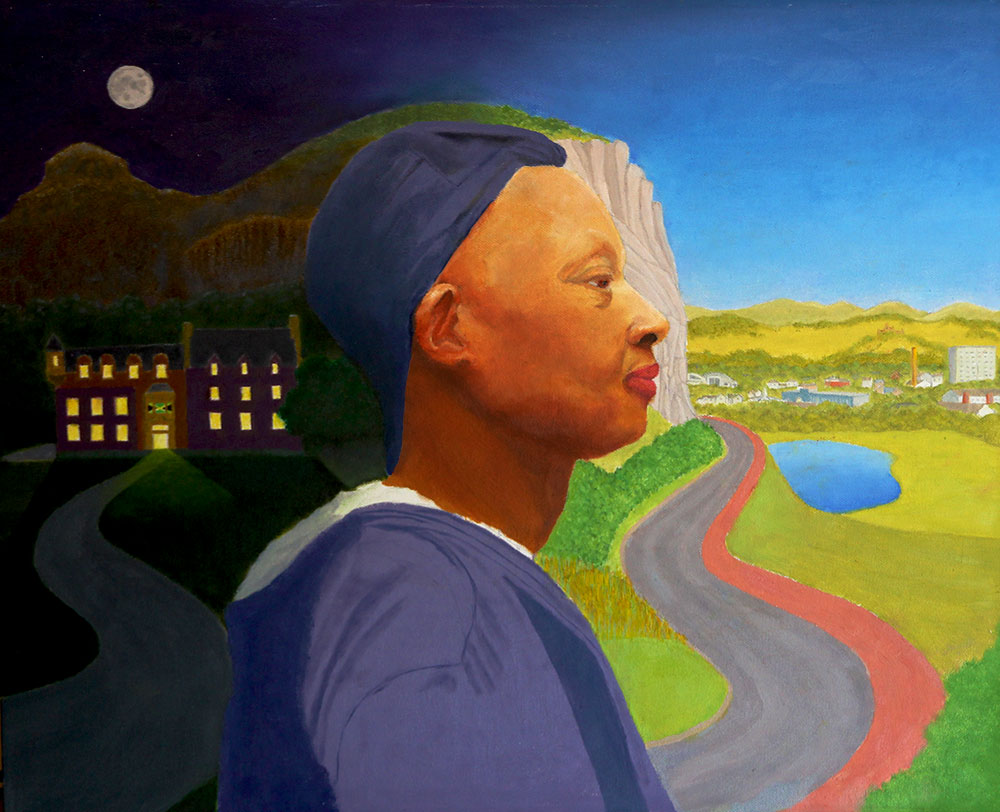 Status: Gifted to Craigmillar community -Not for sale-

Even though ill at the time of painting this portrait, people feel people seem to feel Sandra’s strength of resolution is yet very much present the picture. I like the idea that in the artefact of this picture, she caries on influencing people to bring about strong caring communities.

Sandra was a quietly determined community social hero. Sandra made a difference to many, especially young people in deprived areas, as in Edinburgh, Wester Hails, Dumbydykes, to name but a few, and significantly of course, in Craigmillar. Few realize she took part of very early Scottish Parliament experiments at the old Calton Hill High School over looking Arthur’s Seat, long before the Scottish Parliament became the reality it is today (here seen in the daytime half of the picture half hidden by the cliffs, of Arthurs Seat -‘Samson’s Ribs). Indeed, despite terminal cancer, and all that came with it, she never really stopped, creating a new youth arts project for Craigmillar, right up to the end. Sandra was a remarkable human being, who in her own quiet way, made a difference in so many ways and, to so many.

So at hearing of her terminal illness I strongly felt I had to paint her portrait. I was lucky enough, to know Sandra well (having worked with her in community education for many years), and she was happy to give permission for me to do the portrait. At Inch House, was one of Sandra’s first community education projects which were often in evenings, and in the day time in Craigmillar.  In the paintings distance, was one of her last youth projects. The road, also relates to Richard Demarco’s ‘road’.